Rod was born in Pickering, North Yorkshire in 1940 and soon after the family moved to Portsmouth where he attended a local school until he was twelve years old. He then spent the rest of his school years at the Royal Hospital School at Holbrook, a school primarily for the sons of naval personnel. It was there that he began his life long love of boats and the sea.

On leaving Holbrook he joined the navy at HMS Ganges, a shore training establishment for boy entrants to the Royal Navy. After transferring to the Fleet Air Arm he was posted to RNAS Bramcote near Nuneaton then to RNAS Culdrose, Cornwall, as an aircraft mechanic with 796 squadron. He then spent a short period on security duties in Northern Ireland during the early troubles guarding the reserve fleet and on border control. From there he went to Scotland and it was there, in 1959, that he met his future wife, Elma. He spent two years aboard HMS Victorious on a Far East Commission with 892 Squadron before being posted to RNAS Abbotsinch (now Glasgow City Airport). Rod’s Naval career eventually led to HMS Osprey, Portland but he subsequently avoided a planned posting to the USA to work on Phantoms by borrowing £100 from his Grandmother to buy himself out of the navy to remain in England with Elma.

Rod’s other great loves besides boats were cars and travelling to hot climates. He was very lucky to achieve all three in abundance. He spent ten years at Lee Motors, Dorchester (which became Rob Walkers and then Caffyns) and in 1978 he joined Chesil Beach Motors, in Chiswell, Portland as a partner with Mr Vic Wells. Following the devastating floods when the whole business suffered a catastrophic loss they moved premises to top o’ the hill, Easton, where it is to this day, with Ford and Esso franchises. Three years later he became sole owner and in 1990 purchased further premises in Weymouth and again took on Ford and Esso franchises At the peak of operations 53 people, mostly local, were employed and when the time came to retire he delayed the sale for nearly three years until a sale was agreed that would keep the majority of the staff employed.

Together Rod and Elma had numerous holidays to hot climates and also spent many months each year in their villa on a canal in Empuriabrava, Spain, (a boat owners’ paradise), where Rod had a boat and where they made many new friends. Sadly, in 2009 he was diagnosed with cancer. This did not stop their travelling and they continued to visit many places abroad as well as long holidays at their villa until very near the end of Rod’s life.

Rod was a founder member of the Dorset Table of the Freres de la Cote, a fraternity of individuals focused around a common love of the sea, and was for a time The Vice Commodore of the Royal Dorset Yacht Club.

He was extremely appreciative of the opportunity that he had been given to learn sailing at Holbrook and in recognition of this, Elma, wishing to carry on with Rod’s generosity, has made two large donations to the Chesil Sailing Trust in Rod’s memory with the aim of providing a similar opportunity for young or disadvantaged local people to learn to sail. The photographs show a small event held to celebrate 10 years of the Sail for a Fiver scheme and acknowledge receipt of Elma’s initial generous donation. 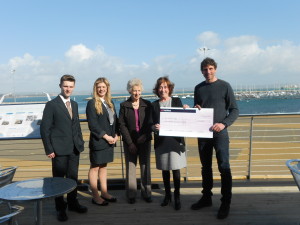 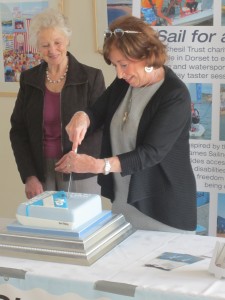 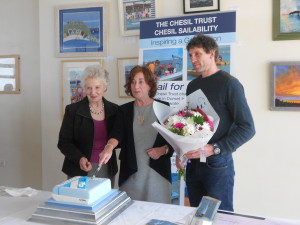 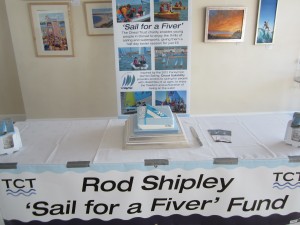 A short video of the celebration can be found on

The Trust is very grateful for Elma’s donations and keeps the monies separate from other funds and uses it to support schemes approved by Elma. These schemes can be found in the sections covering the Trust’s activities and include sponsorship of the Sail for a Five and Windsurf for a Fiver schemes,as well as the  acquisition of 4 dinghies for our partner organisation, Chesil Sailability. Elma’s funding has enabled  the schemes to run for the past 7 years.